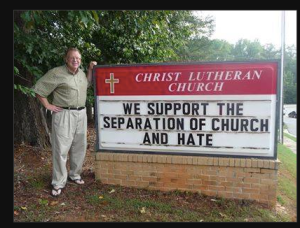 An ordained minister pleaded guilty to threatening to burn down a New York town full of Muslims…..

Robert “Doggart, a 63-year-old Tennessee resident, is an ordained Christian minister in the Christian National Church. In 2014, he unsuccessfully ran for Congress as an independent, espousing far right-wing views.

But don’t dismiss Doggart as some crazed wingnut howling at the moon. He served in the U.S. Naval Sea Cadet Corps, worked for 40 years in the electrical generation business, has a master’s degree and a Ph.D. from La Salle University, and claimed he had nine “committed” men working with him to carry out this attack.”